We leave around 7.30 a.m. 250km expect us before getting on to the Ukrainian border. The road is flowing. We stop shortly after the departure to change Nicola's motorcycle's tires. Kilometers go by very quickly. In the early afternoon we arrive at the border; as usual it takes us 2 hours waiting on the Russian side, then we move towards the Ukraine side where we present a lot of papers, consisting of two ATA carnets; registrations, Spanish, Chinese, Italian passport, in other words not easy to manage.

Customs officers give up after a few objections and at the end of the formal process they also ask us to take some pictures with us. We enter to Ukraine for about 60 km: today we drive for only 360 km, due to a lot of time we spent at the border. We stop at a beach resort on the Sea of Azov called Novoazovs’k, which during the weekend is crowded with young people. Nicola and Valerio work hard until late at night, in order to change the engine of Valerio's bike. The crankshaft unfortunately no longer holds the pinion hence to avoid more serious problems in the following days, we decide to change it. Meanwhile, the rest of the team has fun among Ukrainian tourists. 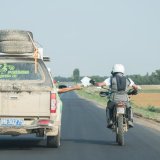 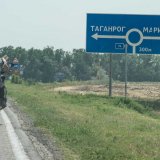 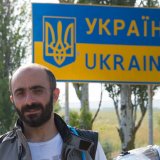 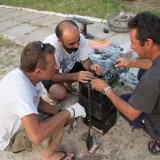 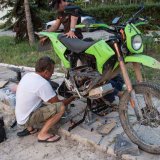