From Hurengiyn to Khovd City: Hard at it.

Children who have slept together, one next to the other, they wake up early in the morning and make noise.

Not a problem: even today we have to stack up several kilometers and, above all, we want to determine whether the predictions of doom - very deep puddles, soft ground, avalanches and cloudbursts - are confirmed or not.

As a matter of fact, driving the first one hundred and fifty kilometers towards Altai, we are persecuted by rain; it is not too strong, but it is constant. Some puddle is there, and every time that we see one of it a few meters from us, we are unsure if keep unchanged the speed - between 40 and 60 hours - or look for an alternative. We cannot make an abrupt steering, because there is the risk of destroying the car or the back side of the cargo.

For the motorbikes is more fun, because they are agile and who pilot is not less nimble. But here is cold, a lot, two thousand meters with rain and thick clouds that cover the sun; therefore Nicola and Valerio take the opportunity, when we stop for changing the batteries, to add a coat of clothing, change the gloves and put on one more padded and waterproof. 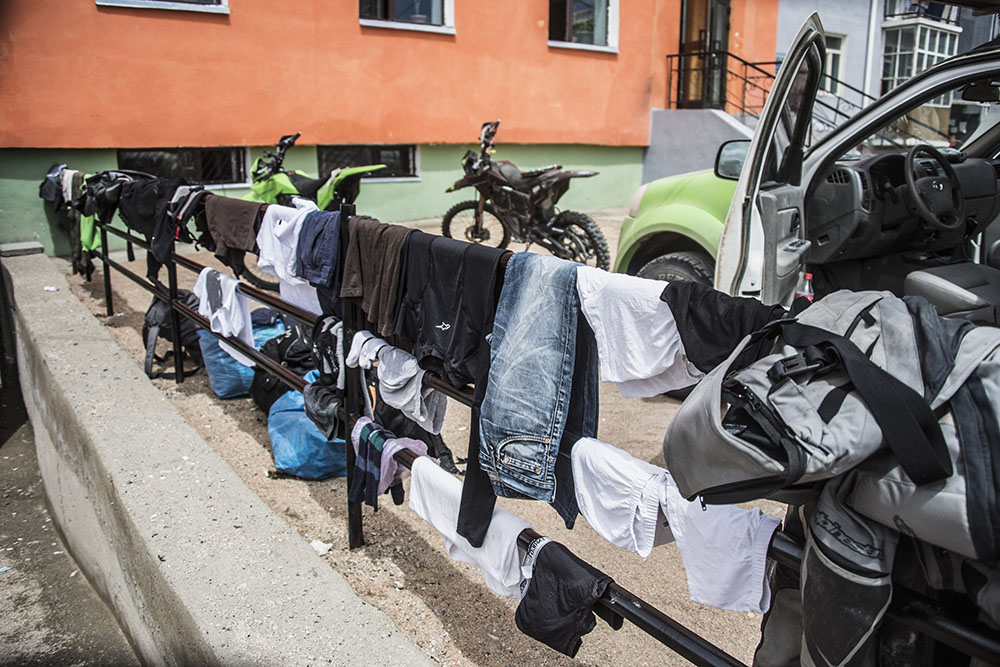 We are now finally come out of the Southern Mongolia, the Gobi. Now we run along the west side, infiltrating between the high peaks of the Altai, near the which there are some of the most characteristic areas of the Country, as well as a series of points of historical and cultural interest.

The rock carvings, at the height of Tsagaan Sala's caves, according to academics, are dated at forty thousand years ago and are among the most important of the entire Asian continent. In the same area, there are statues of ancient warriors with armor and uniforms different, to testify that, in this border region, there were several interferences from the Kazakh population, whose culture has mingled so much with the local to be generating different languages. So much so that our guide told us that from Khovd onwards will not always be able to communicate with the people she will meet.

Meanwhile, we must be able to arrive to our destination, Khovd City. The cars need a maintenance work. Every day undergoes crazy stress and isn't enough tuning the tire pressure, fix screws and bolts with care. Some welds, on the rear plate holding up the motorcycle in case of emergency, are come off due to the sudden change of the terrain. The interior of the car is colour camel. There is so much sand inside that by a finger on the dashboard we can write the coordinates of the day.

And then motorbikes; caked mud, constant stress. The wind, the altitude and temperature will affect the engine's performance. We arrive to Altai around noon and we have a surprise: it's eleven a.m.!? Yes, now we have reached different latitude and there is one hour less because of the different time zone. So we enjoy an extra hour of light that might be useful. We don't end up saying "light" while we were waiting at margin of a petrol pump, that the sun pierces the clouds. In a while from eight degrees we perceive at least ten more. At two thousand meters these changes are not so absurd: very cold with rain and very hot with the sun. We take jackets and sweatshirts off and we are ready to go. We did not expect to be able to achieve today the city of Khovd. But if we can get there, driving for another two hundred miles - in these parts, it takes usually at least four hours - tonight we could sleep calmly and tomorrow morning we will devote ourselves for studying the route in order to reach the border, our first entry in Russia.

The sun is now lord of the sky and lights are surrounding our route. Everything is bright and we can have a more precise reference point: on the right, twenty kilometers as the crow flies, we can see a large green area planted. They are the first trees we see, except for a few rare shrubs in which we came across when crossing the towns. Now we are at a lower level of 1500 meters and there, in the green spot, maybe the altitude is still lower.

It is the Khar Us National Park, a protected area, wet from the lake of the same name: this is the second largest lake in Mongolia and, apparently, it is unapproachable, like a beautiful sculpture of an anonymous artist that you can look and not touch. The banks are muddy in fact, to such an extent as to become quicksand. Any form of life that tries to approach is condemned to sink along the edge of the water. Actually, you cannot fish, you cannot swim and there is no access for boats or other means of bathing. In winter the lake freezes over, only at that time someone tries to enter with some two-wheeled vehicle, but most of the time the ice gives way and there is a risk to freeze. We continue to travel at a good pace, but often, just when there is an illusion that the road is straight and safe, a deep hole appears out of nowhere. And then you can slip. This happens. So one of the motorbikes receives minor damage to the handlebars, but does not affect the gear and, according to what state the pilots will be repaired in an hour, when we'll get to destination. As we travel, between two and four-wheel vehicles continue to ask where are the pitfalls that had been announced. We proceed with calm but wary: the "surprises" come when you least expect it and most of the time, in the territories of the genre, are not at all relished.

Racking our brains about the bigger question, here it’s the answer comes in the unexpected form of two large vans that carry a European license plate. They are Dutch citizens, the youngest of whom is seventy years old. As aliens from the same galaxy and emigrants on another planet, we come across and we cannot help but stop, put the reverse gear, and find ourselves speaking a common language. These people are traveling by about six months. "We are retired" - says one of the drivers, while in the meantime the wives come near to us and introduce them - "and we dreamed of traveling the world, in this manner." We ask them what we want most, once we know they have entered into Mongolia from Russian border, the same towards which we are heading. That is, how are the roads conditions, if indeed there are landslides blocking the path and how long it'll take to reach the destination. The comparison is reassuring: the streets, of course, will not be as beaten track on which slip with their eyes closed, but if they made it with the means with only two-wheel drive and with a few more years on his shoulders, we can move on serenely. This is what happens: we travel the road for another hundred miles, skirting the Altai's heights, where locals hunting with eagles. They choose only the females, because they are more aggressive and more precise in pointing. They train them from an early age, even before they know how to fly, and make a pact with them "human-animal", need for mutual survival. Here we live "yet" so..

On June 25, we are almost one month prior to arrival in Italy. Nicola, Giorgio and Valerio are fixing motorbikes while Enrico and Mirco has succeeded in depicting and shooting what happens daily, they help to do all the rest. Instead for the writer, who during the morning drives one of the pick-up and with the help of others is responsible for maintenance and assists the team in every need, the night has the task to be inspired to tell you what you are reading right now. In any event, today, apart from a bit of fun walking around the markets, we weld how much there was to assemble; we fine tune the motorbikes and clean cars and, aboveall,we lighten the ideas. Tomorrow we aim at Olgii as an intermediate step, and only there we'll understand where we can get. In a camp, in a Ger, perhaps the last in which we'll have the privilege of staying up to who knows what other adventure. We do not know if we'll be able to have an internet connection to send this story, but we feel to be able to write that, for today, it is really all. 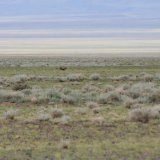 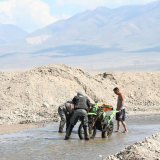 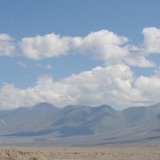 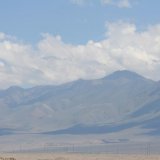 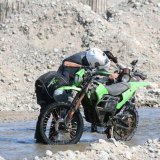 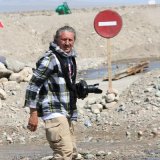 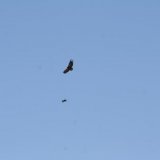 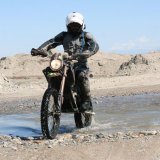 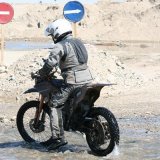 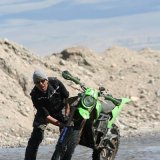 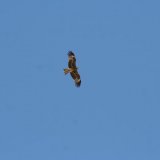 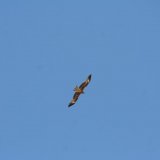 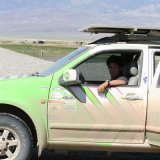 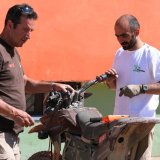 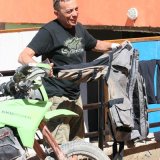 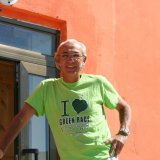 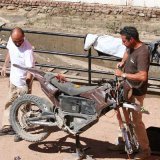 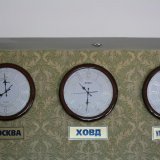 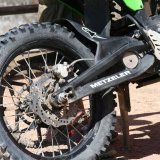 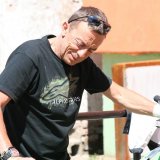 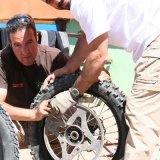 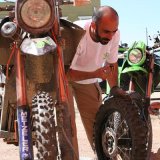 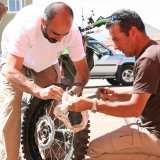 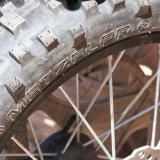