Today is exactly a month since we are traveling and in fact we begin to feel tired, especially after yesterday which was an exhausting stage. In general, to understand what it means to travel with the electric motorbikes it is right to try to explain you how is managed our day, which in fact is organized based on the duration of batteries and the time required to recharge them. First, we must say that a trip of this magnitude in such remote regions would be impossible if we did not have our mobile charging station and spare batteries that we can replace during the day.

In any case, although we can drive up to 250km before making a further reload that requires at least 2 and an half hours, the constraint of the electric battery remains. Specifically, we experienced the constraint just at the ends of each day, because very often missing "the little bit" to get to the destination but to do so you need a break to reload and often this extend your travelling time up to late night. However, this hasn't been what occurred last night when the Nicola's motorbike arrived at 300mt from the hotel and we were forced to push it!

About yesterday, we stopped to sleep in Makat, a city built close to oil wells. Newly arrived the police told us to be careful because there are many fools and drunks, in addition to this, another welcome was the hotel owner, rude and anything but hospitable because she has refused to let us recharge the batteries, so this morning we have departed without the "full" charge. After 200 km, we went beyond the city of Atyrau, we stopped in a "cafe" to recharge the batteries and take a rest. We have eaten Palmeni, kind of ravioli with broth, typical of Russia.

Finally around 5 p.m. having travelled for further 330km, we’ve reached a beautiful beach on the Caspian sea, white sand and with dunes but the water is not as nice, it is of brown color but anyway we still had the chance for a swim. In the meantime Flavio has cooked some rice and tomatoes; simple but very good before going to sleep and watching an amazing sunset. Ride Green, Sustainable food. 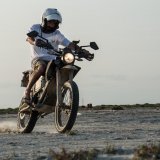 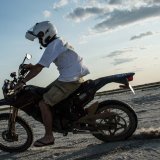